What should be done about “fake news”? 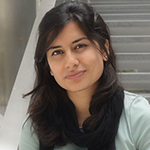 Wajeeha Ahmad develops recommendations to better align incentives and the environment that propagate fake news. There are three broad issues at the heart of the fake news phenomenon:

Wajeeha is a researcher in MIT’s Internet Policy Research Initiative and student in MIT’s Technology and Public Policy Program.