IPRI’s Joel Brenner was featured today on the MSNBC program “For the Record with Greta”.

“You know, part of the difficultly, Greta, is that we share our secrets very widely, internally in the government to people who are cleared to receive them. That`s what we make us efficient, but that makes these secrets a lot less secret. Ben Franklin used to say three could people a secret but only if two of them were dead. And we put this information and call it secret into systems to which thousands of people have access. That means that the likelihood of the secrecy being breached goes up exponentially in cases like that. That`s a condition of being wired for efficiency`s sake and it`s a condition we`re living with. This is not a one-off. It`s not going to go away. It won`t be the last one.” 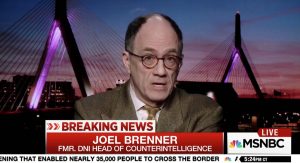 […] Read more of the transcript at MSNBC