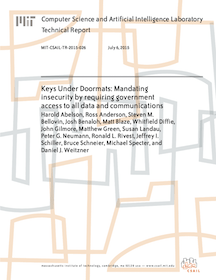 Mandating insecurity by requiring government access to all data and communications

Twenty years ago, law enforcement organizations lobbied to require data and communication services to engineer their products to guarantee law enforcement access to all data. After lengthy debate and vigorous predictions of enforcement channels “going dark,” these attempts to regulate the emerging Internet were abandoned. In the intervening years, innovation on the Internet flourished, and law enforcement agencies found new and more effective means of accessing vastly larger quantities of data. Today we are again hearing calls for regulation to mandate the provision of exceptional access mechanisms. In this report, a group of computer scientists and security experts, many of whom participated in a 1997 study of these same topics, has convened to explore the likely effects of imposing extraordinary access mandates.

We have found that the damage that could be caused by law enforcement exceptional access requirements would be even greater today than it would have been 20 years ago. In the wake of the growing economic and social cost of the fundamental insecurity of today’s Internet environment, any proposals that alter the security dynamics online should be approached with caution. Exceptional access would force Internet system developers to reverse “forward secrecy” design practices that seek to minimize the impact on user privacy when systems are breached. The complexity of today’s Internet environment, with millions of apps and globally connected services, means that new law enforcement requirements are likely to introduce unanticipated, hard to detect security flaws. Beyond these and other technical vulnerabilities, the prospect of globally deployed exceptional access systems raises difficult problems about how such an environment would be governed and how to ensure that such systems would respect human rights and the rule of law.