When I invited Jean Pierre Blais last spring to speak at MIT I did not expect that, one year later, the theme of the event would be diverging policies. But as the FCC, under the leadership of Ajit Pai, prepares to dismantle the policy framework for “net neutrality,” the Canadian telecom regulator continues to strengthen rules that ensure broadband access does not follow the walled garden model characteristic of cable TV, and more generally, reflects consumer rather than telecomm industry interests. 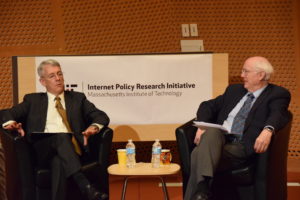 Mr. Blais’ visit to the Internet Policy Research Initiative (IPRI) coincided with his final weeks as chairman of the CRTC. In conversation with David Clark, the timing created an ideal opportunity to cover key accomplishments during Mr. Blais’ 5-year term, most notably: the re-creation of a trusted and user-friendly institution; unbundling cable TV last spring; the declaration of broadband as a basic service last December (with the goal of unlimited data plans); and two important rulings that prevent mobile carriers from zero-rating their own services as well as those of certified third-party providers, the latter having been announced a few days prior to the event. Mr. Blais described the discriminatory pricing rulings as the second and third pillars in Canada’s net neutrality policy, following rulings from 2008-09 that addressed traffic shaping by ISPs. (For a thorough analysis see Carleton University professor Dwayne Winseck’s essay CRTC Zero-Rating Rulings are a Significant Win for the Open Internet.)

In many respects, the arguments and policies put forth by Canadians for (and against) an Internet that is open, available and affordable to all are not dissimilar to those in the U.S. But a more fundamental difference between Canadian and U.S. approaches to telecom regulation that Clark discussed with Blais is reflected in the fact that the CRTC is administered by Heritage Canada, the government department responsible for the country’s cultural industries. In other words, cultural policy (via broadcast policy) and telecom policy are intrinsically linked. 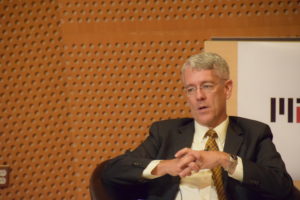 While Canada has its own internal cultural conflicts (as does the U.S.) it has, as a whole, historically been dominated by the U.S. Well over half of Canadian film, television and radio content is comprised of American productions. The domestic industry has accordingly been protected for decades through Canadian content (Cancon) quotas and taxes. While many Canadian creators have simply migrated south to play in a larger market, the various Cancon rules have nurtured a domestic cultural industry that would barely exist otherwise.

Blais’ view is that for the most part, quotas have done their job; although they will not disappear completely, they are no longer the best tools for stimulating growth in the Canadian cultural sector. The new digital distribution platforms are global, and rather than competing against American content in the domestic market, Canadians must focus on creating and promoting quality content for export both in the U.S. and the rest of the world (presumably even if that means distributing through Netflix, which claims it distributes and produces “local” content not because of quotas but because of demand). “If Denmark and Norway can do it,” said Blais, “then so can we.” But it means adopting a more entrepreneurial mindset—a challenge for an industry that has learned to operate within a protected environment. Blais cited Blue Ant Media and DHX as Canadian success stories. (Without getting into the messy details of the inherently problematic relationship between art and commerce, I would say this perspective conflates the subsidization of Canadian art and culture in particular with the subsidization of art and culture more generally. Nonetheless, as a Canadian myself, I agree that it’s time to revisit the American cultural imperialism narrative that has dominated the Canadian psyche for much of its history.)

The issue gets more complicated when considering efforts to promote digital innovation, specifically by exempting digital distributors from the Cancon tax that the incumbent BDUs (the Canadian equivalent of MVPDs) must pay (5% of gross revenues). The exemption, in effect, protects American distributors as Netflix has dominated the Canadian market for digital services since it set up shop in 2010. A 2016 survey showed that online streaming services Crave TV (owned by Bell) and Shomi (owned by Shaw and Rogers) had one-seventh the number of subscribers than Netflix. And Amazon Prime Video launched in December 2016, bumping Canadian-owned CraveTV to third place and presumably putting Shomi out of business entirely. However, imposing the Canadian sales tax framework onto foreign services—with a portion of the funds going to support Canadian content—is less controversial in terms of telecom policy per se, and would result in much more revenue than the Cancon tax. (For an overview of the various tax proposals under consideration—including taxing ISPs—see University of Ottawa Professor Michael Geist’s New Digital Taxes May be the Future of Cancon.) The issue of taxing foreign streaming services has been the subject of much debate as Netflix in particular expands its operations across the globe. Australia started collecting taxes this year while the European Union is discussing a single tax system for digital media.

An interesting detail in the Cancon debate is the fact that several Canadian cultural organizations asked the CRTC to allow zero-rating of domestic content, a request that was rejected. While the rejection seems in line with the CRTC’s shift in its approach to protectionist policies, it is curious that promoting Cancon was not viewed as an “exceptional case that demonstrated clear benefits to the public interest” (see the CRTC’s differential pricing framework). 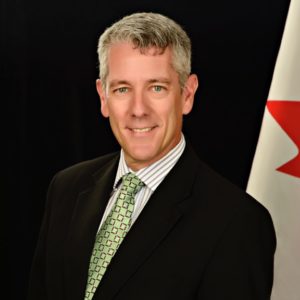 In any case, the brief tussle over zero-rating Cancon is an example of the more general clash we are seeing worldwide between the pursuit of an open Internet and the goals of the content industry, whether in the interest of protecting copyright, advertising dollars, or domestic content.

When the Communications Futures Program asked its members a few years ago, What’s the Internet For, Anyway? one of the most emphatic answers came from ESPN’s then VP of Digital Technology: It’s NOT for television. And yet the bulk of traffic is entertainment video—television over the Internet—which has led to a situation where the economics of entertainment media (in its current form) dictate the design and direction of Internet technology, business models, and regulation. As discussed in The Ambiguity of Disruption: Discovering the Future of Video Content, entirely new entertainment media forms and economics are emerging that could disrupt the traditional content model. But in the meantime, as William Lehr and Doug Sicker caution in their 2016 paper, Would You Like Your Internet With or Without Video?, building a single network that is optimized for the kind of entertainment video that dominates today could disadvantage the plethora of other types of applications going forward and thus stifle the full potential of the Internet. As a thought experiment, the authors consider managing video traffic separately and explore the advantages regarding regulatory issues such as performance measurement, set-top boxes, universal service, online video distributor reclassification, and Internet interconnection. I couldn’t help but notice that Mr. Blais himself remarked that it is somewhat peculiar that the CRTC finds itself administered by the department of Canadian Heritage given that the future is all about broadband and connectivity—a statement with implications that likely extend beyond what he intended.

The conversation between Jean Pierre Blais and David Clark is available for viewing. This event was hosted by the Communications Futures Program and the Internet Policy Research Institute.