As part of the work on decentralized architectures for the Web, researchers in the Solid project envisioned a notification mechanism which is based on principles of data ownership, application/storage independence and data persistence for reuse. Work on the Linked Data Notifications (LDN) protocol was driven by two visiting students to the Decentralized Information Group, Sarven Capadisli and Amy Guy, during 2016-2017. 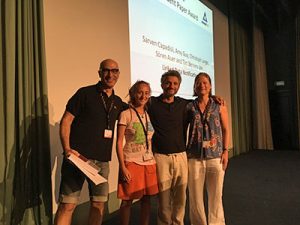 The full-length research article describing this work was nominated for both “Best Research Paper” and “Best Student Paper” prizes at the 2017 Extended Semantic Web Conference, and was awarded the latter.

The authors were commended for persisting with the development of a key building block for Linked Data applications, which is anticipated to enable interoperability between disparate projects – in the spirit of Linked Data principles – through shared RDF vocabularies. The authors were also noted for “dogfooding” their work, by publishing their article on the Web and accepting open reviews through the LDN mechanism itself.

LDN is a simple HTTP-based protocol which describes three roles in notification-oriented interactions: senders, receivers, and consumers. Any resource on the Web may advertise a receiving endpoint (their “Inbox”). The receiver accepts requests from senders (for new notifications) and exposes received notifications in a standard format (identified by URIs) for other applications (consumers) to reuse. This means that individuals can choose a trusted location to store their notifications data (for example a personal data store or server) and authorize applications under different authorities to operate over the data, whilst both: retaining the freedom to switch between applications without having to recreate personal data; and to move the source of the data without losing the functionality of preferred applications.

Since the three roles may be implemented separately or in combination in software, features and functionality may be shared between different providers and authorities, and tailored to the preferences of the user, or the needs of a particular domain. 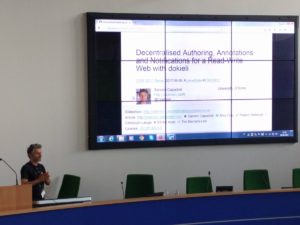 The initial protocol design was advanced and standardized as a W3C Recommendation through the Social Web Working Group. At the time of writing, there are 22 implementations formally reported to pass the test suite, solving diverse use cases from social applications to dataset quality reporting.

Although the standardization process is complete, new implementors are nonetheless encouraged to run the tests and report their activities through the automatic report submission (which incidentally uses LDN to send and aggregate the reports) to help maintain awareness of new applications of this work.